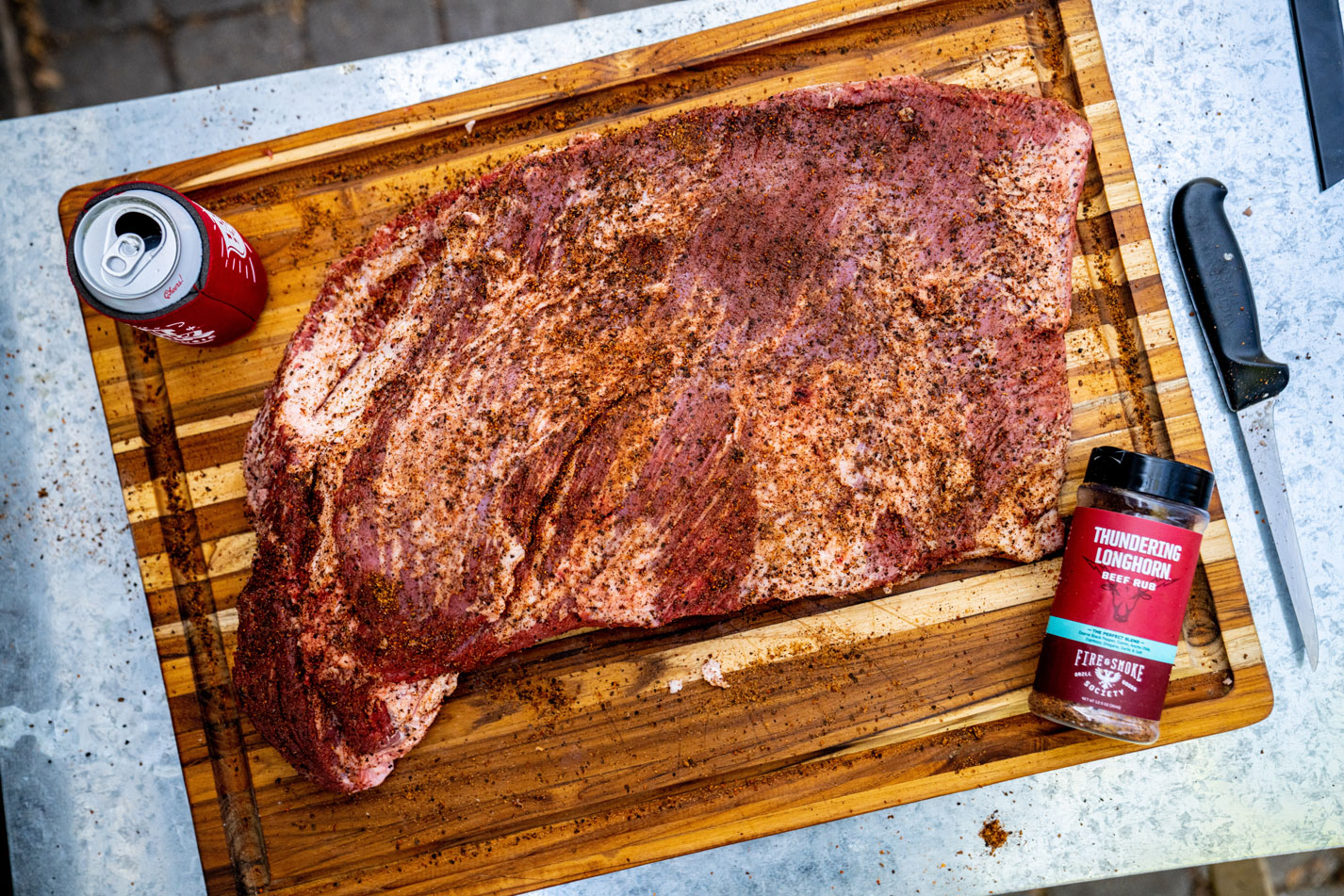 Tis the season when visions of smoked meat dance in our heads. Let’s settle in for a luxuriously slow cook, the wafting aroma of a charcoal fire, and the best brisket around. 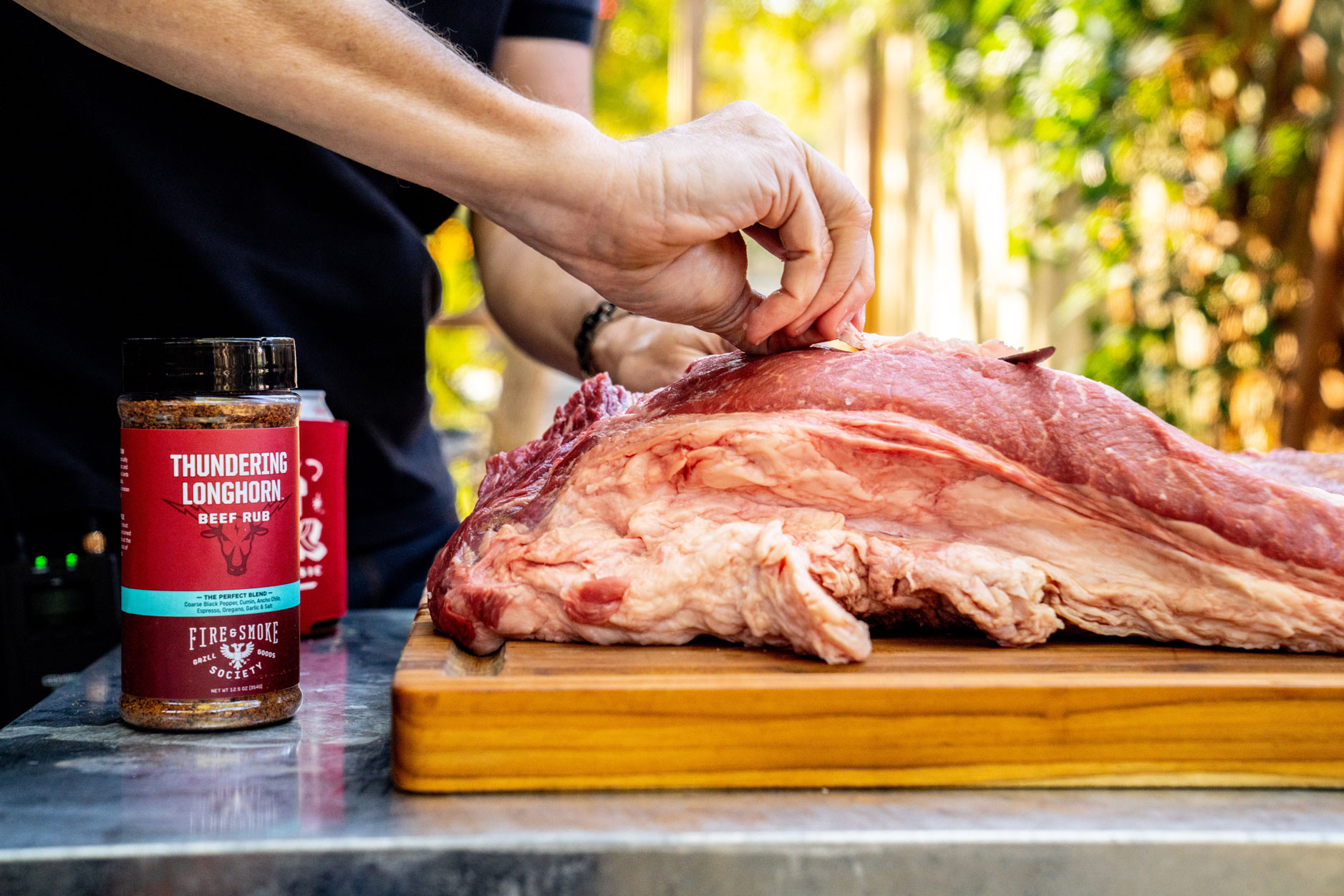 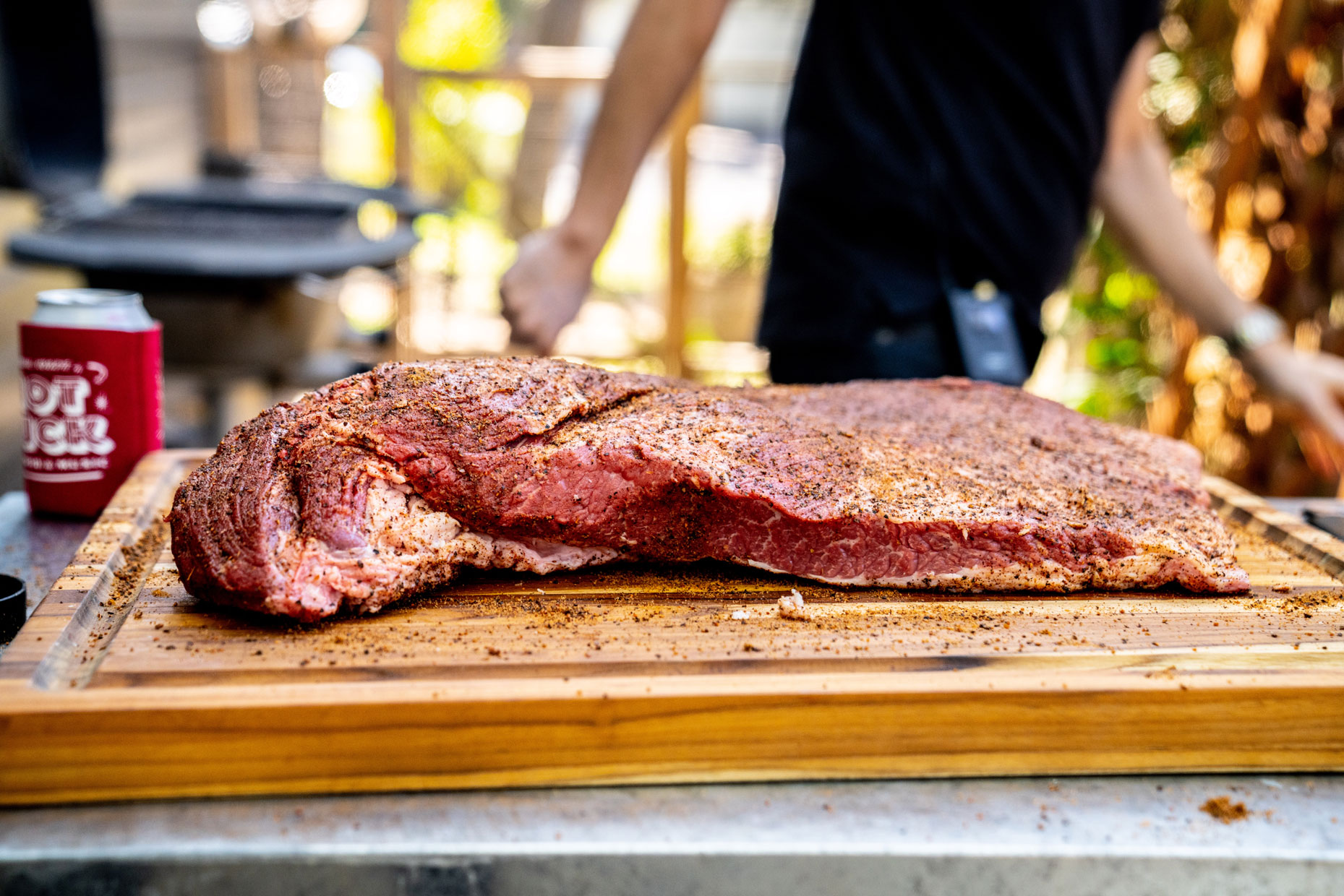 Remove the brisket from the packaging and rinse under cold water; pat dry with paper towels. Place the brisket on a cutting board, fat-side down. Trim away all of the hard kernel of fat that sits between the point (thick side) and the flat portion of the brisket. Square up the brisket by trimming fat from along both sides. If the edge of the flat is thin on one end, trim away an inch or two to create an even thickness. Note: If you think you may be trimming too much, you are probably doing it right.
Trim any excess fat from the top of the flat. Flip the brisket meat side down and trim the fat cap to an even ¼-inch thick. Sprinkle a generous coating of  Thundering Longhorn seasoning on both sides of the meat, and then use your hands to coat the entire surface including the side edges. Set the brisket aside at room temperature for at least 30 minute, or up to two hours. 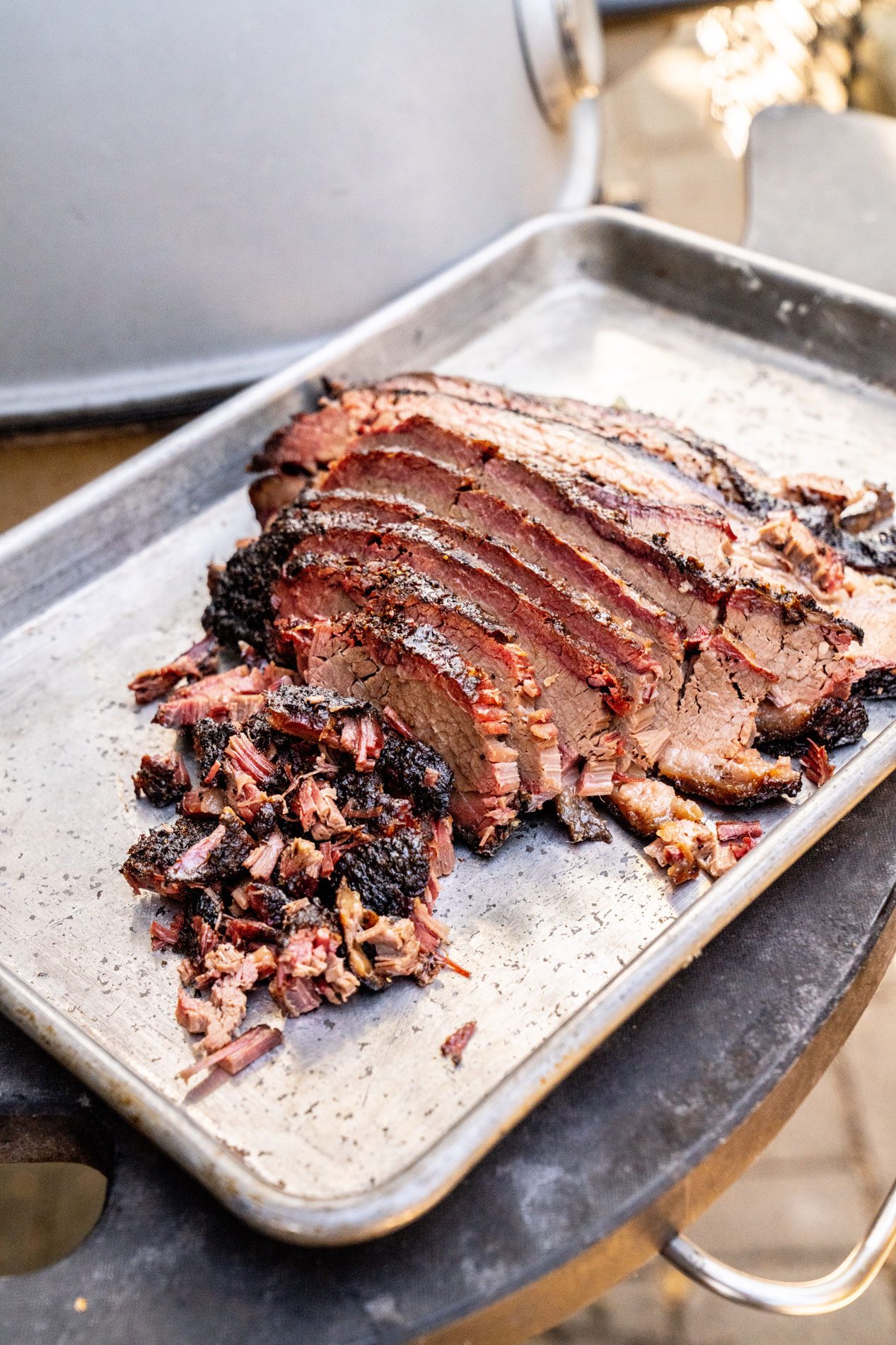 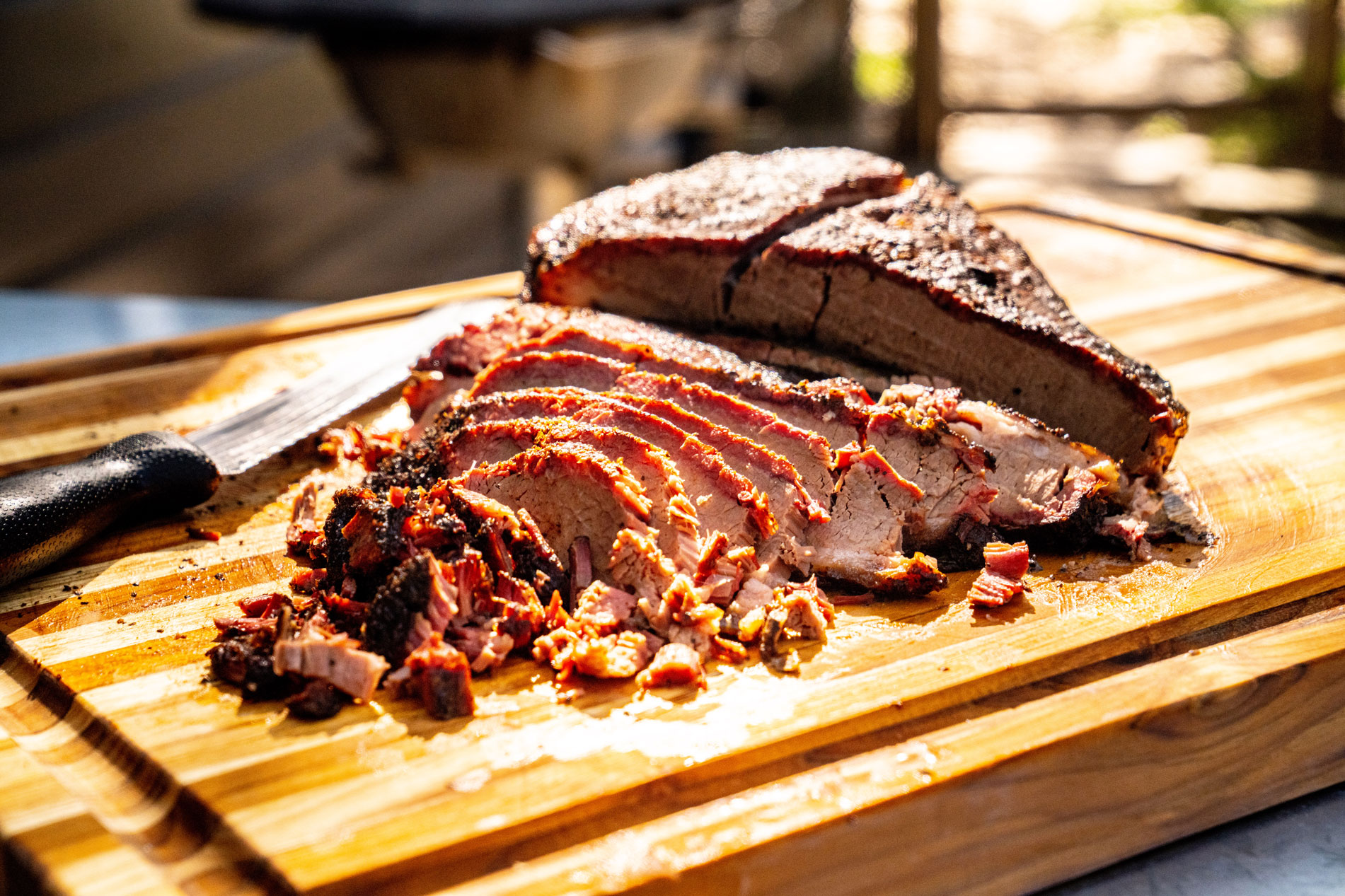 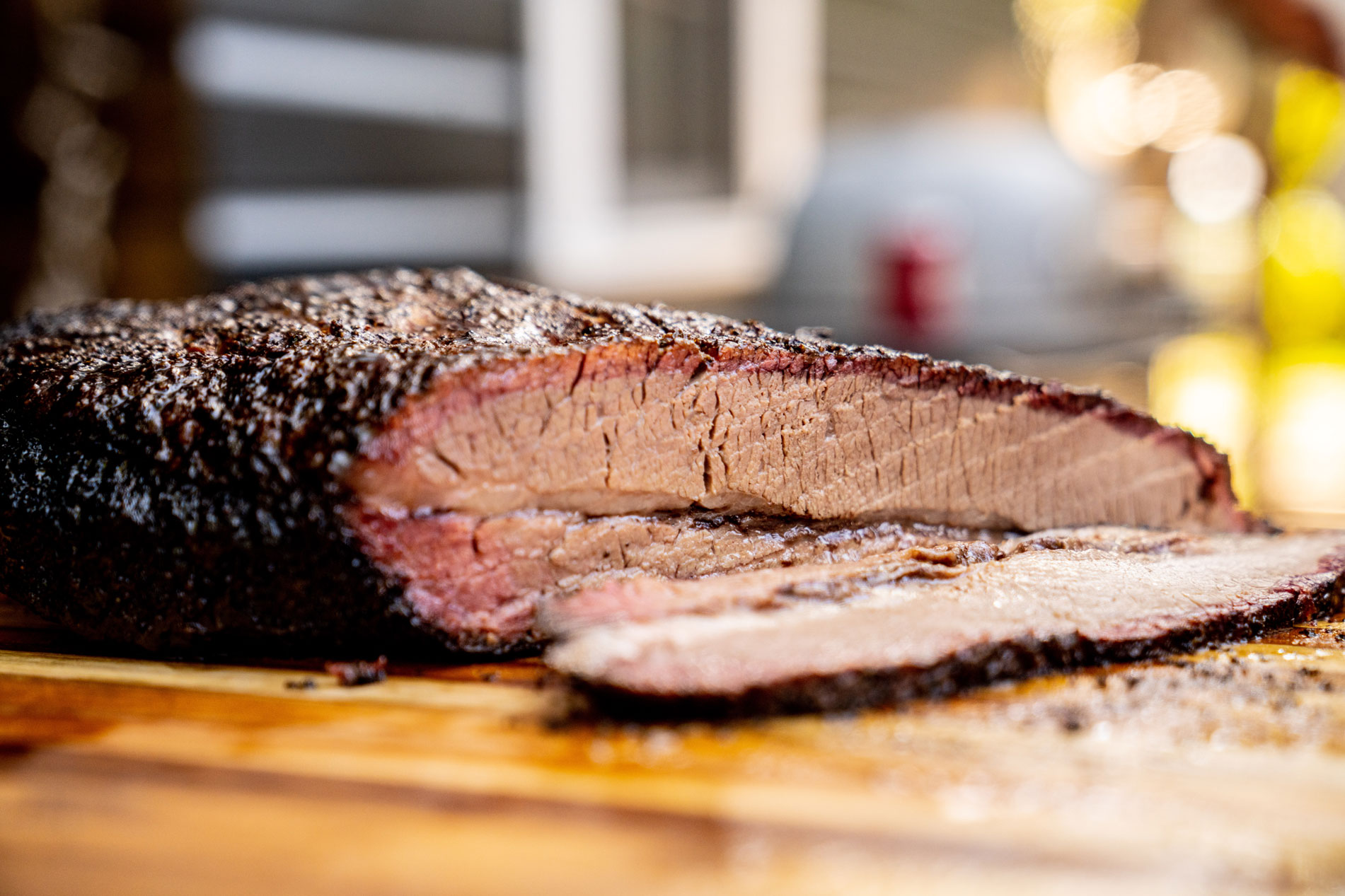 Thirty minutes before you plan to cook, prepare your grill for two-zone cooking and build a medium-high fire. When the coals are glowing red and covered with a fine gray ash, use tongs to remove the cooking grate and place a drip pan with 1 inch of warm water on the side away from the coals. Place a few chunks of hardwood around the periphery of the fire (or a log of hardwood nestled against the coals in the middle of the grill) and return the cooking grate to its position and clean the grates.
When the fire begins to produce a steady stream of thin, blue smoke, place the brisket fat-side up with the point (thick side) positioned toward the hotter side of the fire. Smoke for 3 hours (adding fuel as needed to maintain a temperature of 225℉-250 ℉), and then flip the brisket fat-side down. Smoke for an additional 3 hours or until the internal temperature reads 175℉ . At this point, wrap the brisket tightly in butcher paper and continue to smoke (or cook in a 225℉ oven) until the internal temperature reaches 195℉, about two more hours. Rest the brisket for at least 30 minutes before slicing against the grain and serving as desired. Wrap leftover brisket in plastic and refrigerate for up to 3 days or freeze for up to a month.