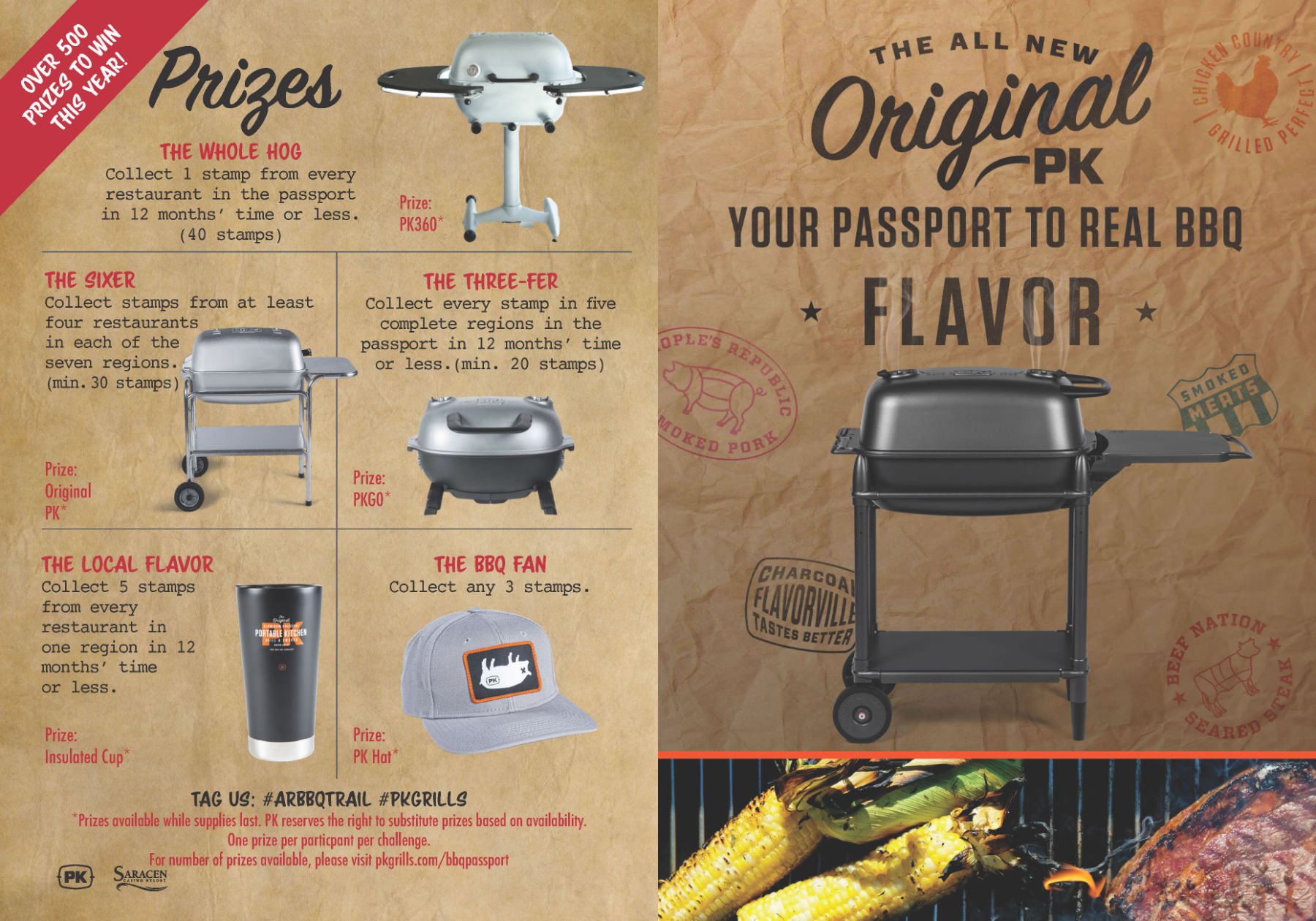 NO PURCHASE IS NECESSARY TO ENTER OR WIN A PRIZE.

This Contest is governed by these Rules, as well as by Arkansas Times Official General Contest Rules (“General Rules”). In the event there is a discrepancy or inconsistency between these Rules and either the General Rules or information in the BBQ Passport, these Rules shall govern. Any individual who enters, attempts to enter or in any way participates or attempts to participate in the Contest (“Participant”) agrees to be bound by the terms and conditions provided in these Rules and to the extent applicable the General Rules, as well as by all interpretations of these Rules by Arkansas Times and by all other decisions of Arkansas Times which are final and binding in all matters relating to the Contest. Contest subject to all applicable federal, state, and local laws and regulations. Void where prohibited or otherwise restricted by law.

During the Entry Period, Participants can enter the Contest by visiting joints listed on the Arkansas Times Barbecue Passport, receiving a rubber stamp impression from the joints on the BBQ Passport, and collecting a prize based on one or more of the challenges as listed in the BBQ Passport. All prizes must either be redeemed by checking the passport box for shipping or by checking the box to pick up and be redeemed at the PK Grills Headquarters located at 7821 Doyle Springs Rd, Suite I, Little Rock, AR 72209. All prizes must be redeemed with a valid photo ID of the individual whose name appears on the passport. Limit one (1) prize per individual for each challenge in the Contest.

The Contest is open to the legal United States residents physically residing in the 50 United States (includes DC) who are at least 18 years of age or older as of Nov. 1, 2021. Officers, directors, employees, contractors, and agents of Sponsors and any entity involved in the sponsorship, development, production, implementation and distribution of the Contest as well as their respective parents, affiliates, divisions, subsidiaries and successor companies (collectively the “Contest Entities”), and their immediate family members (and those living in the same household, whether or not related), are prohibited from participating in the Contest and do not qualify as Participants. “Immediate family members” shall include spouses, siblings, parents, children, grandparents, and grandchildren, whether as “in-laws”, or by current or past marriage, remarriage, adoption, cohabitation or other familial extension.

Employer Restrictions: Participant is solely responsible for reviewing and understanding

During the Entry Period, eligible Participants can enter the Contest by visiting any of the 40 BBQ joints as listed in the BBQ Joints Passport, receiving a passport stamp from the joint to complete the listed challenges, In order to participate, you will need the BBQ Passport and a valid photo ID.

The following identifies the prizes available upon successful completion of the challenges identified in the BBQ Passport:

Limit one (1) prize per participant per challenge. All taxes, fees, and surcharges on prizes are the sole responsibility of the participants. Participants will be issued an IRS Form 1099 for the fair market value of the prizes inclusive of sales or other transaction taxes if total prizes exceed $600. Affidavit of eligibility (including SSN), prize acceptance form, tax information, assignment of rights, personal services agreement, publicity release, and/or mutually acceptable liability releases may be required where not prohibited. Any and all guarantees and warranties for merchandise prizes are subject to the manufacturer’s and/or service providers terms and conditions, and winner agrees to look solely to such manufacturers and/or service providers for any warranty or guarantee claim. Prizes are non-transferable except in the sole discretion of the Sponsors. No substitution or cash equivalent is allowed. PK Grills reserves the right to substitute prizes of the same approximate retail value. Prizes consist only of items specifically listed as part of the prize. All costs and expenses not specified herein, related to any prize, including but not limited to delivery, installation, service activation fees, and other expenses incurred by accepting the prize, are the sole responsibility of the participants.

The odds of winning will depend on the number of eligible participants and ability of participants to visit the BBQ joints.

HOW TO CLAIM A PRIZE:

All prizes listed in the above chart must be redeemed by designating in the filled out passport whether you’d like your prize shipped online or to pick up at the PK HQ with a valid photo ID of the individual whose name appears on the BBQ Passport, together with his/her completed BBQ Passport, by Oct. 31, 2023. PK Grills will make reasonable efforts to validate passports submitted for prizes and reserves the right to disqualify passports that in PK Grills sole discretion are determined to be fraudulent or deceptive.

By entering and participating in the Contest, and in consideration thereof, each Participant individually warrants and represents to Sponsors that they: (i) meet the residency and age requirements stated in these Official Rules; (ii) will be bound by these Rules and the Arkansas Times General Rules, and by all applicable laws and regulations, and the decisions of the Sponsors; and (iii) waive any rights to claim ambiguity with respect to these Rules and the General Rules.

RELEASE OF LIABILITY AND INDEMNIFICATION:

As consideration for entering the Contest, all Participants agree to RELEASE, DISCHARGE AND COVENANT NOT TO SUE Arkansas Times, PK Grills, the other Contest Entities (as described above) and each of their respective direct and indirect affiliates, divisions, parent and subsidiary companies, officers, employees, shareholders, representatives, managers, members, directors, owners, agents, insurers, attorneys, predecessors, successors, and assigns thereof (collectively, the “Released Parties”), from and against all claims, damages, charges, injuries, losses, proceedings, suits, actions (including but not limited to tort actions, product liability actions, wrongful death actions, warranty actions, breach of contract actions, privacy and defamation actions, misappropriation of likeness actions, identity theft, loss of consortium claims), expenses and attorney fees that they or anyone on their behalf (including but not limited to their heirs, representatives or next of kin) have or might have for any death, injury, damage or claimed injury or damage arising out of, involving or relating to their participation in the Contest, including, but not limited to, any claim that the act or omission complained of was caused in whole or in part by the strict liability or negligence in any form of the Released Parties.

Additionally, as consideration for entering the Contest, all Participants agree to INDEMNIFY,

HOLD HARMLESS, AND DEFEND the Released Parties in any action or proceeding from and against all claims, damages, charges, injuries, losses, proceedings, suits, actions (including but not limited to tort actions, product liability actions, wrongful death actions, warranty actions, breach of contract actions, privacy and defamation actions, misappropriation of likeness actions, identity theft, loss of consortium claims), expenses and attorney fees that they or anyone on their behalf (including but not limited to their heirs, representatives or next of kin) have or might have for any death, injury, damage or claimed injury or damage arising out of, involving or relating to their participation in the Contest or for their failure to comply with the terms of the above release provision. This agreement to indemnify, hold harmless and defend applies even if the act or omission complained of was allegedly caused in whole or in part by the strict liability or negligence in any form of the Released Parties.

Unless prohibited by applicable law, Participants authorize and irrevocably grant to Arkansas Times and the other Released Parties (as defined above) permission to, from time to time, reference and discuss Participants and their participation in the Contest in its publication and/or on its website(s) in photographs, video recordings, digital images, audio recordings, as well as in newsletters, news releases, other printed materials, and in materials made available on the Internet or in other media now known or hereafter developed for any purpose Arkansas Times and/or the Released Parties deem proper. Such reference and discussion may involve Participants’ name and other personal/biographical material.

All participants agree to be bound by these Rules. Non-compliance with any of these Rules will result in disqualification and all privileges as a Participant will be immediately terminated. Sponsors, in their sole discretion, further reserve the right to disqualify any person for: (i) tampering with the entry process or the operation of the Contest; (ii) gaining an unfair advantage in participating in the Contest; (iii) obtaining winner status using false, fraudulent or deceptive means; or (iv) engaging in otherwise unsportsmanlike, disruptive, annoying, harassing, or threatening behavior.

CAUTION: ANY ATTEMPT BY ANY PARTICIPANT OR ANY OTHER INDIVIDUAL TO DELIBERATELY CIRCUMVENT, DISRUPT OR DAMAGE ORDINARY AND NORMAL OPERATION OF ANY CONTEST, TELEPHONE SYSTEMS OR WEB SITE, OR UNDERMINE THE LEGITIMATE OPERATION OF ANY CONTEST IS A VIOLATION OF CRIMINAL AND CIVIL LAWS. SHOULD SUCH AN ATTEMPT BE MADE, SPONSORS RESERVE THE RIGHT TO SEEK DAMAGES FROM ANY SUCH INDIVIDUAL TO THE FULLEST EXTENT PERMITTED BY LAW.

By entering, entrant agrees to accept and abide by the Official Rules of this Contest and agrees that any dispute with regard to the conduct of this Contest, rule interpretation, or award of prize shall be submitted to Sponsor, whose decision shall be binding and final. Sponsor is not responsible for any typographical or other error in the printing of this offer, administration of the Contest or in the announcement of prizes, including erroneous appearance of qualification for a prize, and under no circumstances will more than the stated number of prizes be awarded. Sponsor reserves the right, in its sole and absolute discretion, to modify, cancel, or suspend this Contest, or to amend the Official Rules at any time, without prior individual notice, should any factor interfere with the administration, security, or proper play of this Contest as contemplated by these Official Rules. If for any reason Sponsor is prevented from continuing with this Contest, or the integrity and/or feasibility of the Contest is severely undermined by any event including but not limited to fire, flood, epidemic, earthquake, explosion, labor dispute or strike, act of God or public enemy, satellite or equipment failure, riot or civil disturbance, war (declared or undeclared), terrorist threat or activity, or any federal, state or local government law, order or regulation, order of any court or jurisdiction, Sponsor shall have the right, in its sole discretion, to abbreviate, modify, suspend, cancel or terminate the Contest without further obligation. If Sponsor in its discretion elects to so abbreviate the Contest, Sponsor reserves the right, but not the obligation, to award the prize from among all eligible entries received to date. All entries are the physical property of Sponsor and are not returnable.

Except where prohibited, each entrant agrees that: (1) any and all disputes, claims and causes of action arising out of or connected with this CONTEST or any prize awarded shall be resolved individually, without resort to any form of class action, and exclusively by state or federal courts situated in ARKANSAS, (2) any and all claims, judgments and awards shall be limited to actual out-of-pocket costs incurred, but in no event attorneys’ fees, (3) no punitive, incidental, special, consequential or other damages, including, without limitation, lost profits, may be awarded (collectively, “Special Damages”), and (4) entrant hereby waives all rights to claim Special Damages and all rights to such damages multiplied or increased. ARKANSAS law, without reference to choice of law rules, governs the CONTEST and all aspects related thereto.

Copies of these Rules and/or the General Rules may be obtained by sending a self-addressed stamped envelope to: Official Arkansas Times BBQ Passport Rules and/or Official Contest Rules, 201 E. Markham, Little Rock, AR 72201.