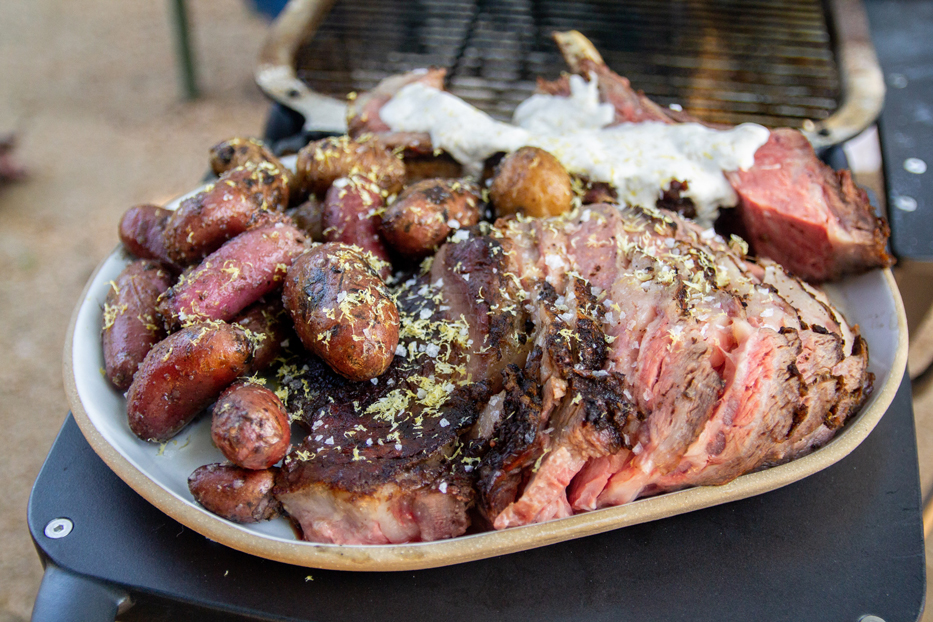 This spectacular primal cut is a project of the best kind. To perform the Reverse Sear method (the best approach for massive cuts of great meat), you’ll first cook the roast at a very low heat, then set it aside to rest for an hour or three. That gives you plenty of time to round out the meal–prep the potatoes, prepare the Anchovy Butter, Horseradish Cream, etc. That means you’re pretty much set (once a killer bottle of red has been uncorked) when it’s time to finish the meat. The last step of browning the ribeye over a very hot fire is dinner theater of the best kind (as is charring the fingerlings over a charcoal chimney of flames). Once the exterior of the ribeye is deeply browned and the meat rests, you’re ready to slice and serve.

The day before cooking, liberally salt the steak with kosher salt, and let it air dry, uncovered, in the refrigerator overnight.
The next day, make the Anchovy Butter and Horseradish Cream Sauce. To make the anchovy butter, combine the drained anchovies and butter in a mixing bowl; use a fork to combine the two ingredients, then set the butter aside at room temp.
To make the Horseradish Cream,whisk together the sour cream, horseradish, and vinegar in a small mixing bowl; taste and add salt and more vinegar as desired. Cover bowl with plastic wrap and refrigerate until needed.
Pull the Ribeye from the oven 1-2 hours before cooking. Thirty minutes before cooking, heat your oven, grill, or smoker accordingly. Then, cook the roast at a low temperature (170-ish℉) until the internal temperature of the reaches about 117℉; remove from heat and allow the meat to rest for at least 1 hour, or up to 3-4 hours, at room temperature. 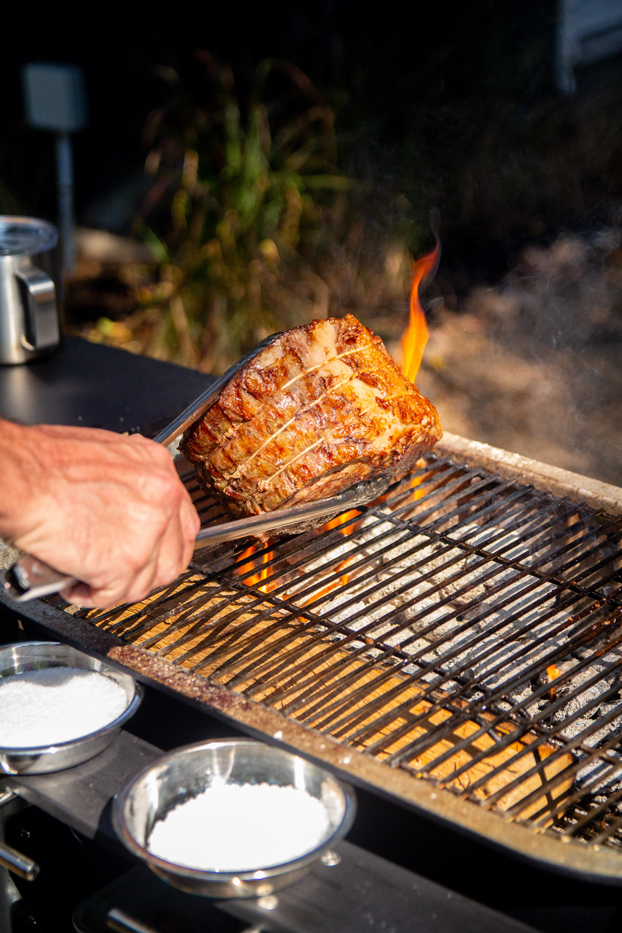 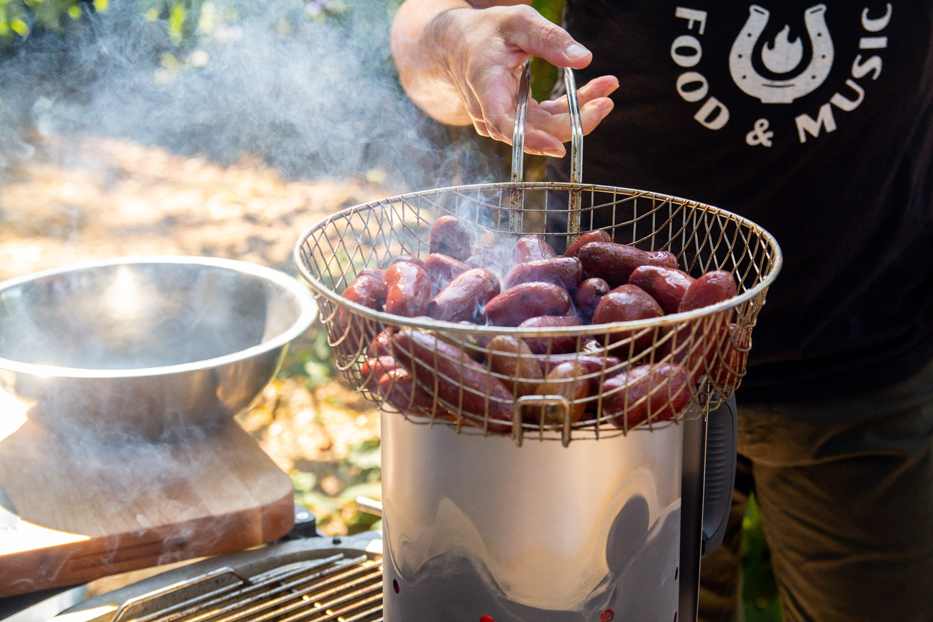 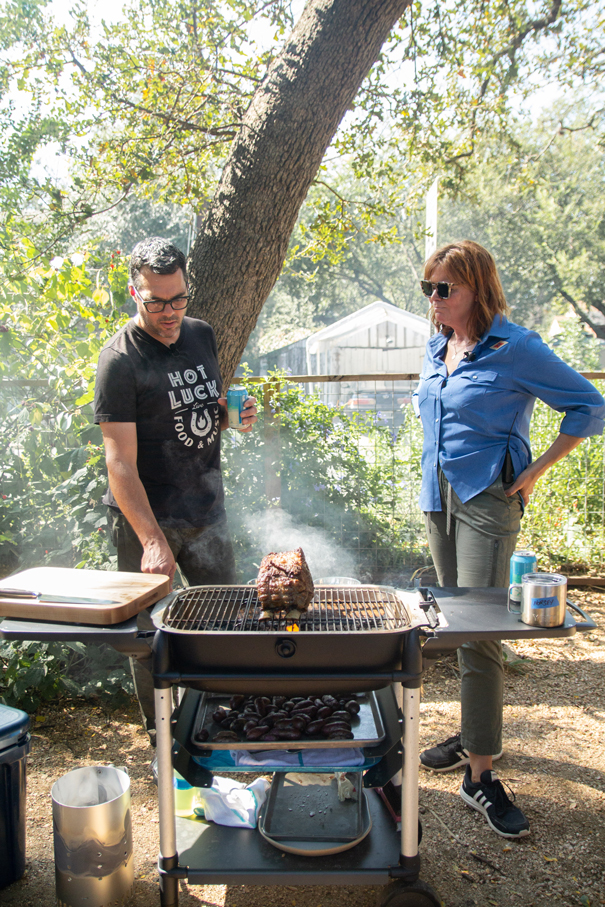 While the meat is resting, simmer the potatoes in heavily salted water until they’re “almost” tender. Drain the potatoes, allow them to air dry briefly and then place them in a mixing bowl. Drizzle with enough grapeseed oil to lightly coat and season with kosher salt.
While the meat is resting, prepare your grill for two-zone cooking and build a medium-high fire.
Light a full chimney of coals. When the flames reach over the top of the chimney and the coals are glowing red and covered with a fine gray ash, finish the potatoes by placing the grilling basket directly over the charcoal chimney, shaking the basket and flipping the potatoes as needed so they don’t burn–keep them moving!!!
Pour the coals in the grill, then tuck the sheet tray of potatoes under the grill (on the AF shelf) to keep warm while you finish the meat. Just before serving, toss potatoes in the Anchovy Butter.
When the coals are glowing red and covered with a fine gray ash, place the roast over direct heat, and cook, flipping and rotating as needed, until the crust is deeply browned.
To serve, slice the ribeye and plate the buttery potatoes, garnish both with flaky salt and lemon zest and serve with the Horseradish Cream on the side.