Fourth of July is a perfectly convivial holiday—celebration, spirited-fellowship, and feasting! To the grill, my friend.

This year, I have a suggestion for the truly adventurous pork-inclined purveyor of the grilling arts: Tower of Pork!

That’s right, a pork loin piled on top of St. Louis-style ribs. All cooked to perfection on the new PK 360 grill —(the slow dance I referred to earlier). 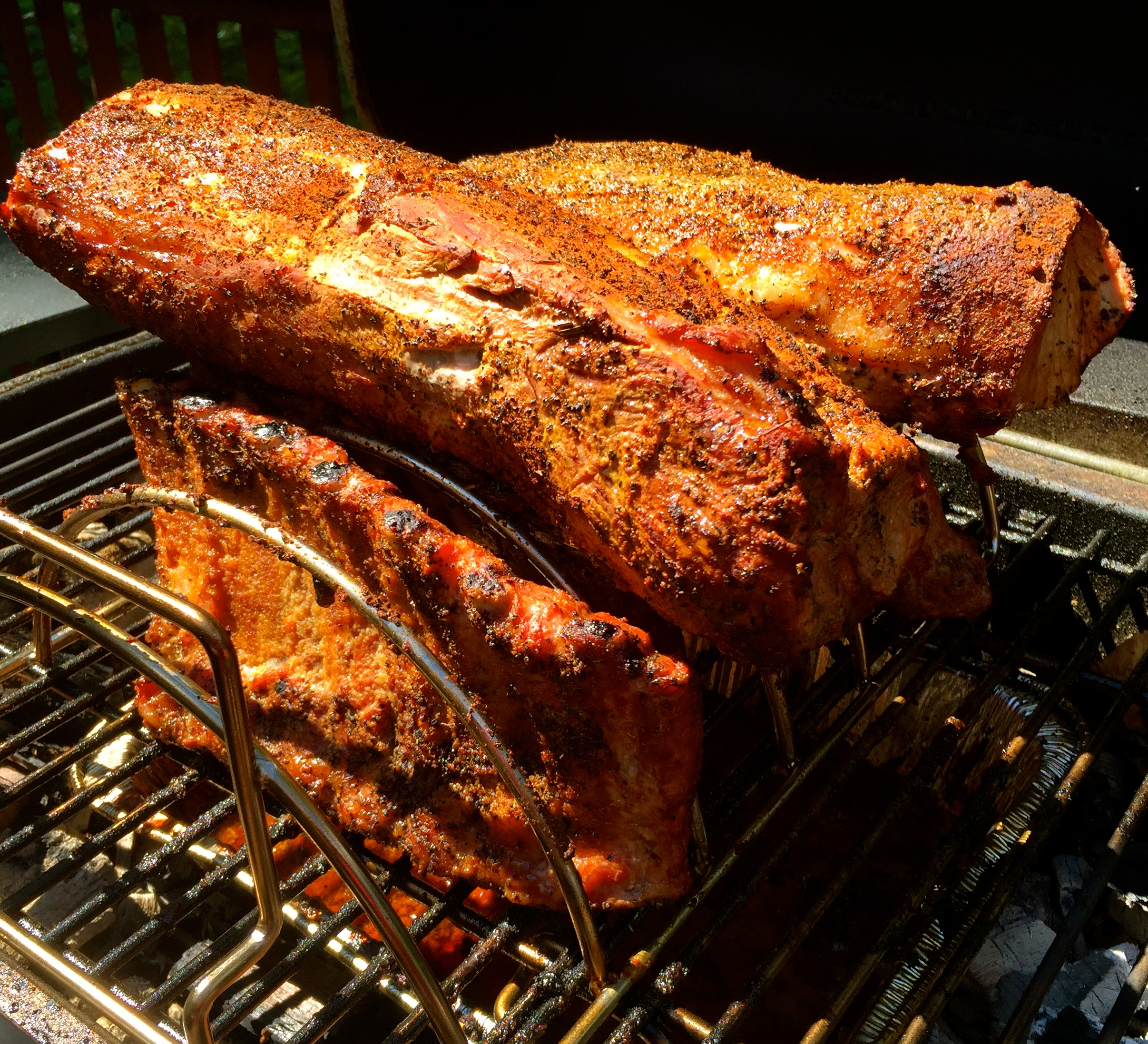 St. Louis ribs are cut from the spare ribs and are generally longer than baby back ribs and not as thick. Like the baby backs, they have a membrane on the back side that should be removed before seasoning. Coat the ribs with olive oil. Mix together a spice rub (kosher salt, granulated garlic, onion powder, smoked-paprika-hot, black pepper, and white pepper) and season the ribs generously.

Grilling a whole pork loin is easy and delicious. The main concern is because the loin is lean it will dry out if overcooked. To aid with the moisture and flavor begin by coating the pork loin in yellow mustard. Then season generously with kosher salt and a spice rub (same as above for the ribs except I added coffee: two tablespoons of finely ground dark roast).

We configure the grill for indirect heat similar to how we did the turkey (except you will note that I oriented the water pan differently to accommodate the length of the ribs and loin). Start a chimney of lump charcoal and once the coals are lit spread them around the water pan. Add a few soaked hickory chunks.

To construct the tower, I used a rib rack. I cut my two racks of St. Louis style ribs in half and placed them in the rib rack (even though the PK 360 is large enough to accommodate full racks of ribs, halving them allowed for more distance from the fire to the ribs).

Likewise, I cut the pork loin in half and draped it over the ribs. The lid of the PK 360 is designed to provide quite a bit of height, which allows for multiple levels of cooking through the use of racks. 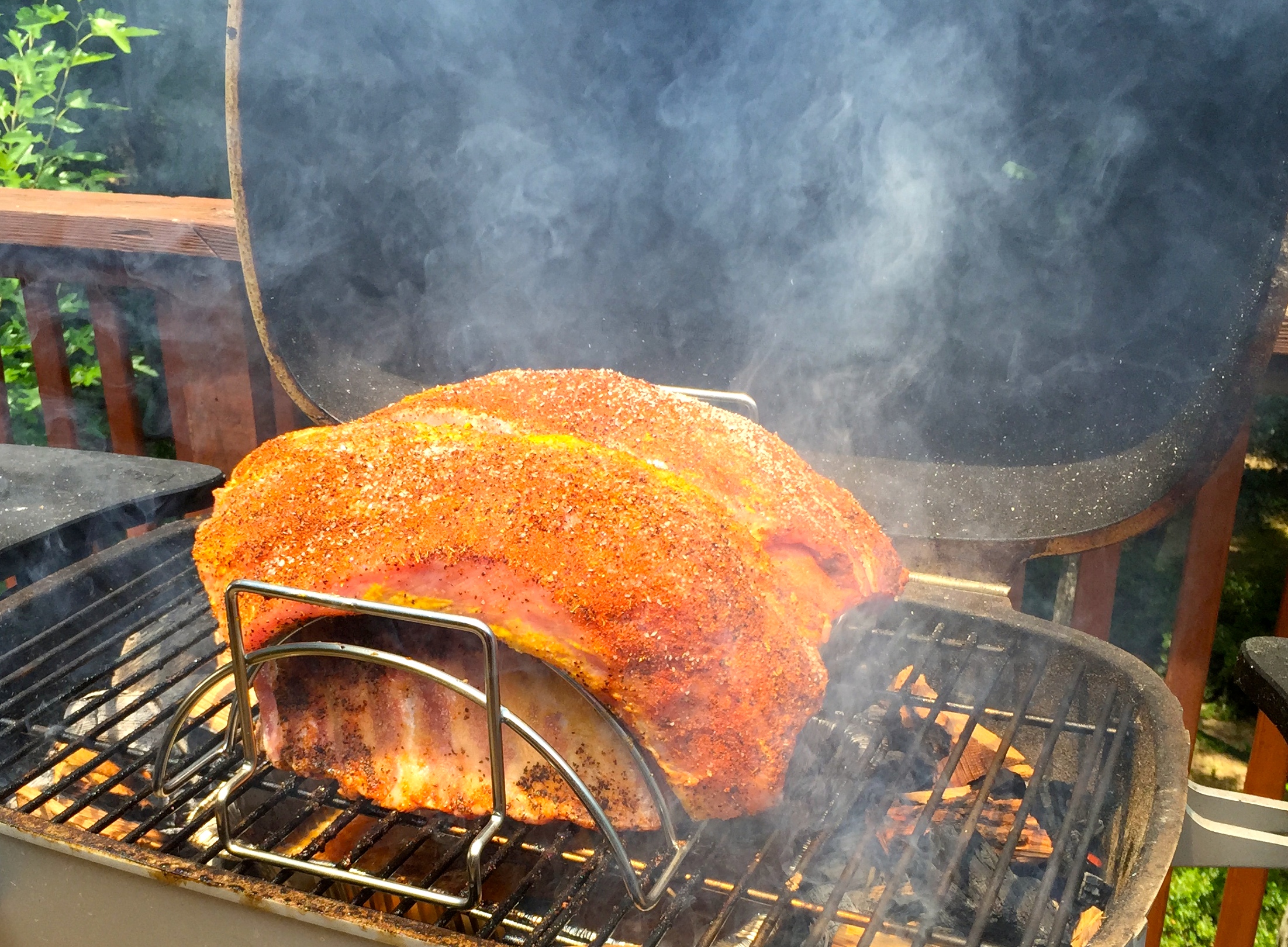 For this slow dance with pork, I recommend keeping the grill around 250 degrees.

The pork loin will cook faster than the ribs. The recommended internal temperature for pork loin is 145 degrees. Once it reaches that temperature remove it from the grill to rest. The one featured in this post was done in about two and a half hours.

The ribs should continue cooking until they are tender (meaning you can bite freely through them without any pull, but they do not fall of the bone when you pick them up). A good way to test is to cut a rib off of the end and perform a highly technical taste test—or two if needed.

During the last hour of the cooking, you can baste the ribs with your favorite sauce. Adding sauce too early, especially sauces with high sugar content, can cause the ribs to burn.

These St. Louis ribs reached the desired tenderness after four and a half hours of cooking. The heat properties of the cast aluminum PK 360 with the control of the four vents allowed for this long-slow cooking process without adding any additional coals. 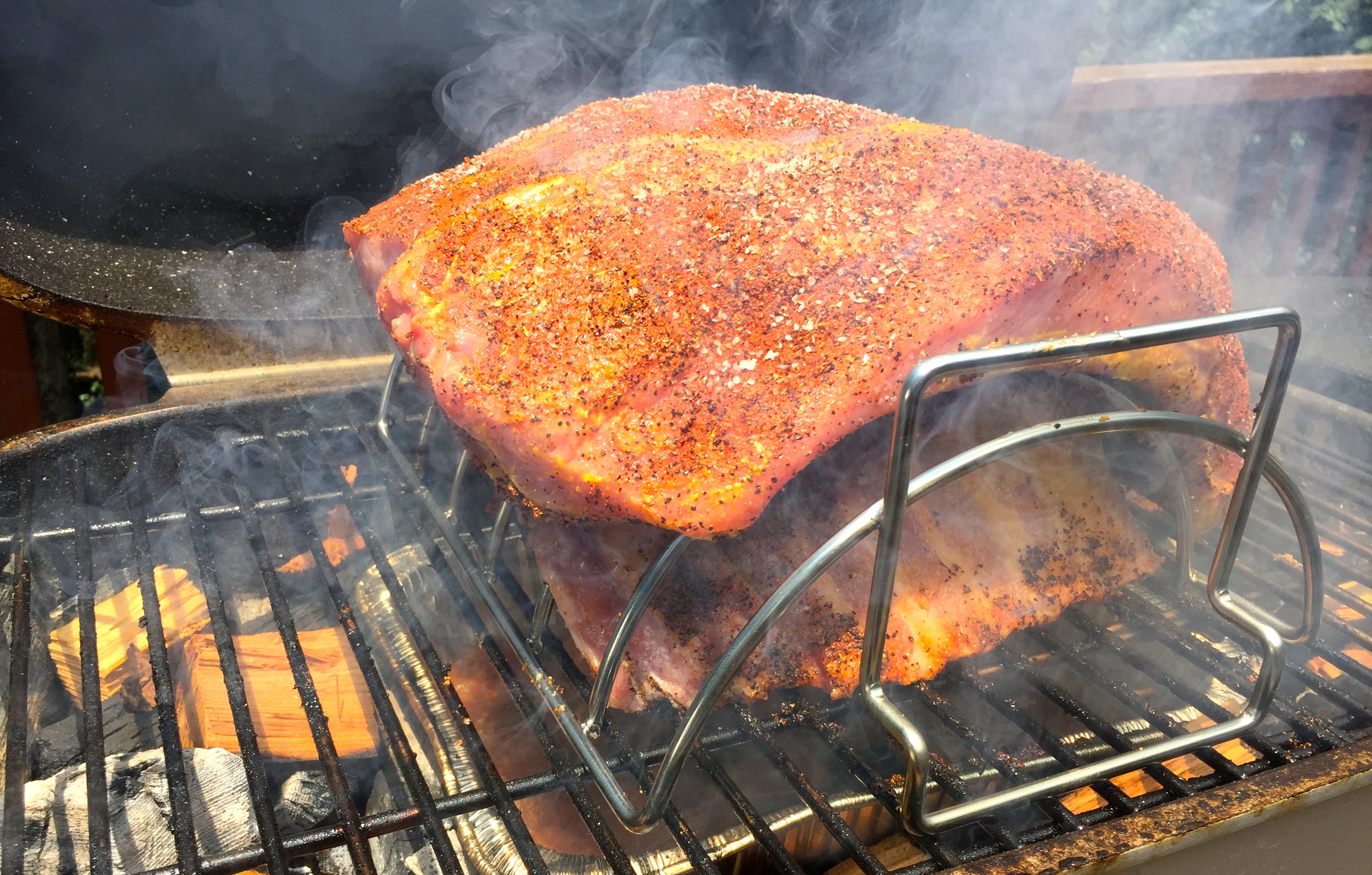 One key with any long-cook process is not opening the grill anymore than necessary. I allowed the tower of pork to cook the first two hours undisturbed. After that I opened the grill about 30 minutes later to check and remove the pork loin. Then until I thought the ribs were about done, I only opened the grill every hour to check on them.